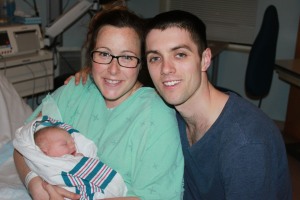 Pregnancy was 10 months (don’t be fooled, 40 weeks ain’t nine months!) of training all leading up to the big game called labour… and eventually the delivery of our sweet little cuddle puddle.

On the morning of June 5th I was watching the View and drinking my iced coffee like usual and I started noticing contractions that I hadn’t felt before. I’d been having Braxton Hicks for quite some time but this was…different! It was lower and hurt. I was tracking them and noticing they were getting closer together. Around 1:00 pm I called my husband at work and told him to get his butt home, we were heading to the hospital!!

I was smiling inside because I knew the moment we’d been working toward for so long was almost here — but on the outside I was panicking because I wasn’t sure I could get through this whole labour thing.

We got to the hospital after hitting every red light only to find out I was only 1 CM dilated. The nurse informed me I could have been walking around 1 CM for the last few weeks.

So we were sent home, much to my frustration. My mom made dinner because I knew if we planned an elaborate, yummy, supper, it would happen!

The minutes turned into hours and the pain became excruciating. By 11 pm I was begging to go to the hospital because I was desperate for some relief. We grabbed our bags and got to the hospital. In the 15 minute drive I had about 6 or 7 contractions.

To nurses came down to get me in a wheel chair and took me up to get checked out. By this point I was 8CM dilated and the nurses couldn’t believe I had made it that far at home. That was all thanks to my husband who learned everything from our couples labour and delivery yoga workshop we did!

We decided that because I had gone so far on my own we weren’t going to do an epidural or morphine and instead opted for laughing gas during contractions which just takes the edge off. It helped ALOT.

My doctor was called in (which is a great sign) and she broke the water. Unfortunately there was meconium in the waters which can be a sign of fetal distress so the NICU team was called in as a precaution and I was told he would be handed off to them to assess and make sure everything is A-OK.

At 1:07 on June 6th (HIS DUE DATE!!) he popped out! He was absolutely perfect weighing 7.4 lb and 19 3/4 inches. Little Oliver was in our arms at last and we were smitten. He’s fit into our lives seamlessly and we couldn’t imagine life any other way.